A 1932 summary of Concordia's progress 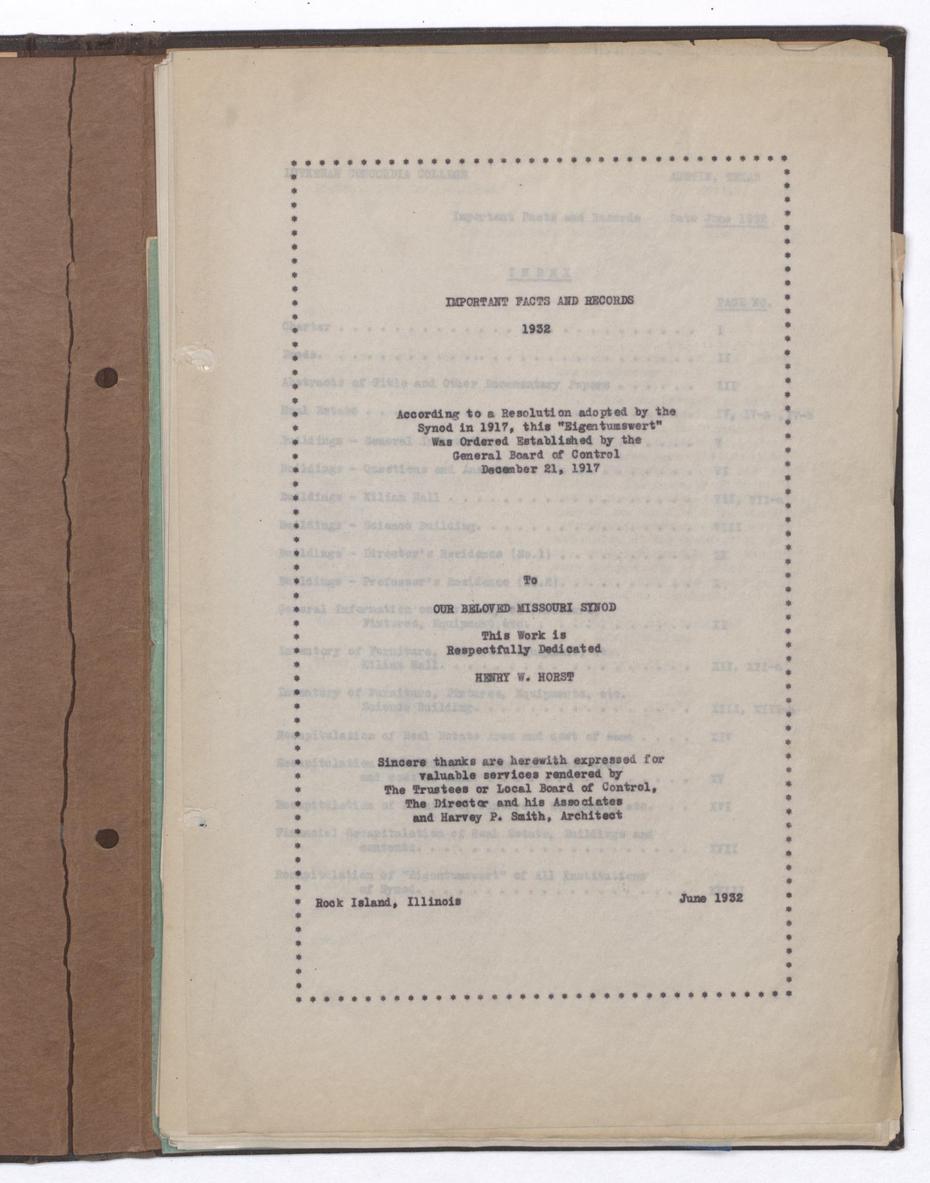 A 1932 report to the Missouri Synod provides a snapshot of six years of progress at Lutheran Concordia College. Important Facts and Records includes documents, photographs, blueprints, and inventories related to the new school.

A blueprint of the campus property is part of that 1932 record. 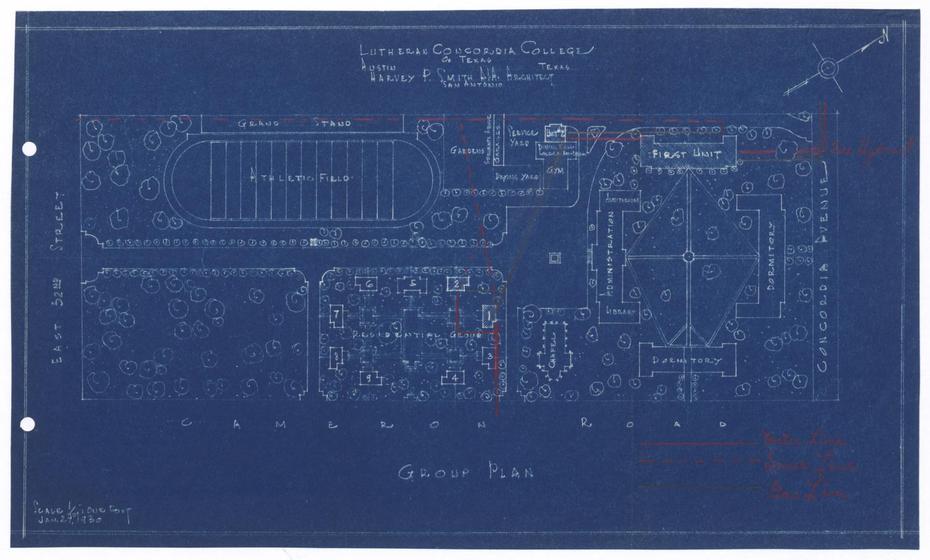 From Rev. R. Osthoff's letter to the Concordia Board of Control, December 12, 1927. Dr. Pfotenhaur was the Missouri Lutheran Synod president.

Establishing Lutheran Concordia College required an enormous amount of coordination between school's local officers, called Concordia's Board of Control, and the national Missouri Synod Lutheran officials. Each decision about building the school, from designing classroom buildings to replacing lightbulbs, required an exchange between the Texas Board of Control and the Lutheran Church's Board of Directors. Concordia's online holdings include more than 700 letters written between 1920 and 1948 that illustrate the hands-on work of building a school for boys. A significant amount of this correspondence is exchanged between Rev. R. Osthoff of Giddings, the 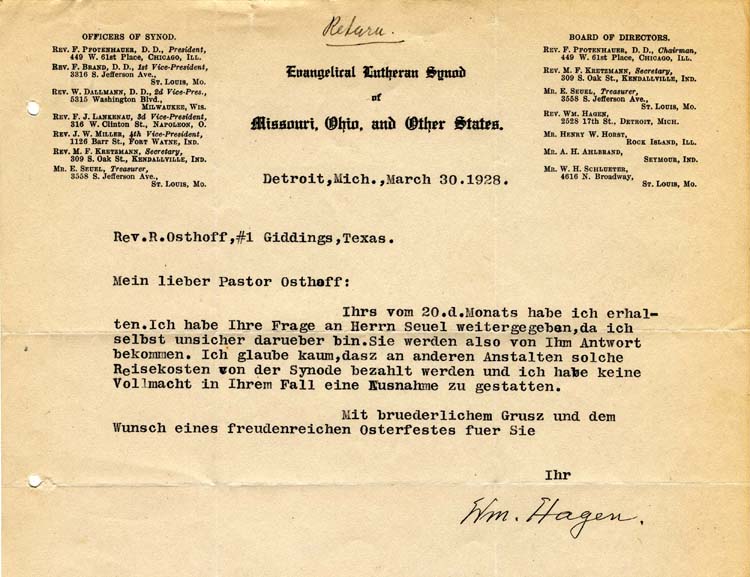 Texas Board of Control's chair, and Rev. William Hagen, a national Lutheran official located in Detroit, Michigan. Together, Osthoff and Hagen made large and small decisions about school finances, from determining how many utensils to buy for the lunch room, to ordering maps for student classrooms. Other Board of Control members represented in the correspondence include C.M. Beyer of Wichita Falls, H.C. Gaertner of Brandon, Henry Fehr of Austin, and J.W. Behnken of Houston.

Most of these letters date around the school's building period, from 1926 through 1932. The timing of the school's construction coincided with the post-1929 Great Depression, and many letters discuss the difficulty of building a school with limited funding. Osthoff's letters reflect the needs of a growing school population, while Hagen's letters reflect the need for strict economizing.

The correspondence is written in both English and German, and the correspondents switch easily between languages. Behnken even apologizes to Osthoff for answering his German letter in English, explaining that he is dictating his reply, and his secretary does not speak German. The Concordia letters offer a unique opportunity to study Texas' bilingual Lutheran community, where people of German Lutheran heritage continued to practice their faith in the language of Martin Luther well into the 20th century.

Concordia's letters also offer insight into the Austin's development as a city. Correspondence with 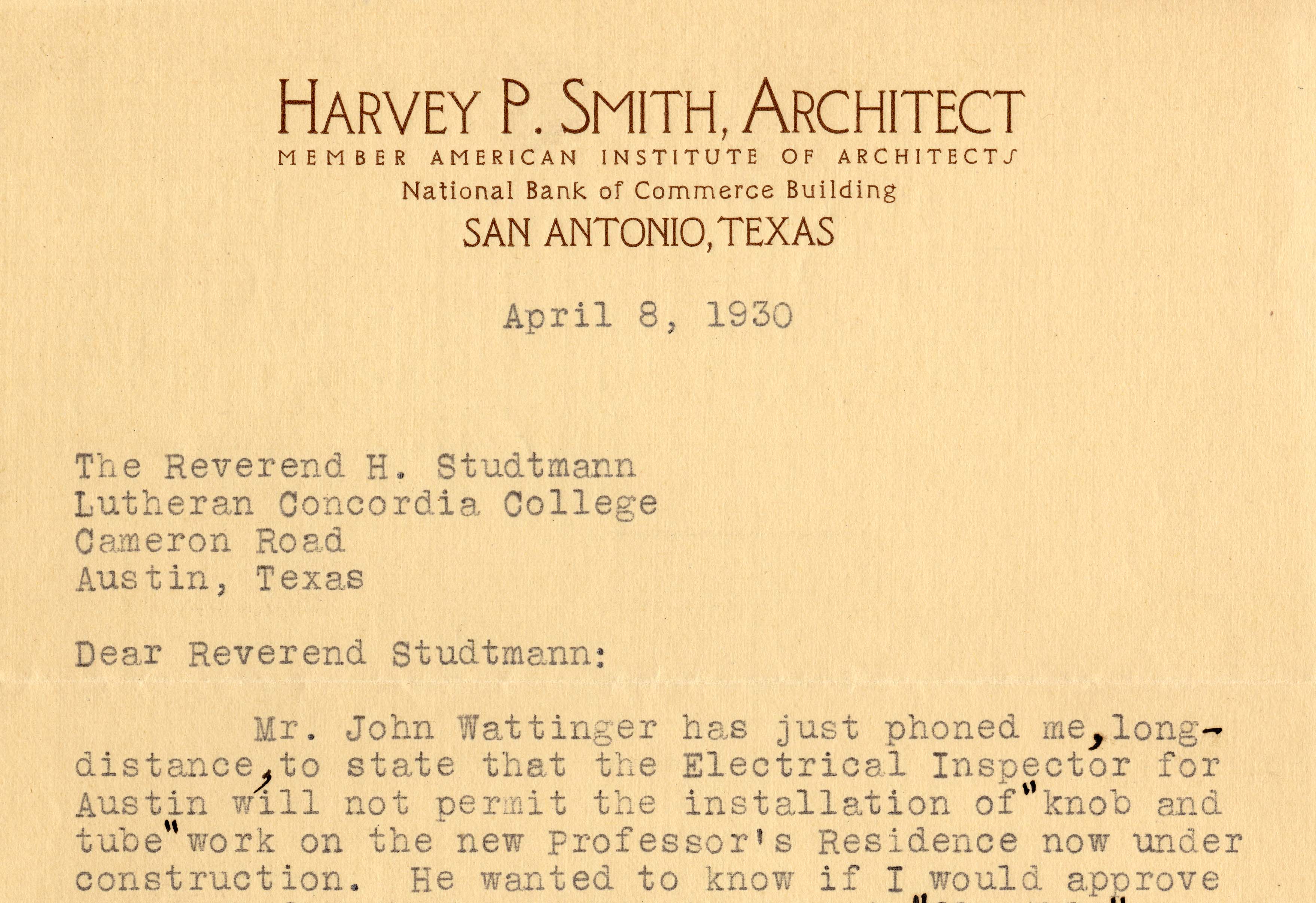 San Antonio architect Harvey Smith and with various contractors in the Austin area discuss Concordia's development from the Hancock property, located near what was then Austin's East Avenue and 32nd Street. Early letters reference the building of Concordia Avenue through this tract; later letters in the 1950s express concern over the "super highway," now known as I-35, that replaced East Avenue.